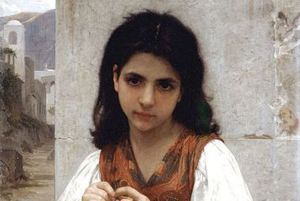 SERVANT OF THE SCORPION – Chapter 8, The Fall of the Blessed Virgin

“What are you doing with her?” Rita demanded of me.

Startled by the tone of Rita’s voice little Rosalinda took my hand again.  I resisted the impulse to yank my hand away.  That would have made it look worse.  Esmeralda lowered her gaze and imperceptibly shook her head.

Rita continued without mercy, “Irma told us you were following her and then you disappeared.”

I said, “I was just waiting for Irma.  I saw Rosalinda go through that break in the wall so I went after her.”

I looked over into Irma’s unflinching eyes and knew I shouldn’t tell the truth.  Irma knew I was following her the whole time and she had acted like she didn’t.

Irma asked little Rosalinda to come over to her.  “You went out again?  What am I going to do with you?”

Rosalinda replied emphatically after serious consideration, “I don’t know.”  Irma carried her away inside.

Rita dismissed the workers and she, Itza and Esmeralda had me retell what I had seen when the tourist man and woman were killed.  I didn’t tell them about Irma and Carlos.  They hadn’t asked.

Rita and Esmeralda agreed that they needed to meet with all the other apprentice pastors as soon as possible in the cloister.

They seemed to shut me out once again as they strode down the corridor away from me.  I shuffled past the room from which Irma had taken the metal suitcase.

The door opened abruptly.  I was startled.  It was Irma.

She shut the door behind us.  It appeared to be her bedroom.

Against one corner was a simple mattress covered with colorfully woven blankets.  Beside the bed was a small table improvised as an altar.  Upon it were lighted votive candles that illuminated a portrait of the Blessed Virgin.  Next to that was a rickety bookshelf of holy articles and figurines.  Against the opposite wall was a wood closet inlaid with a spiral mosaic.  It was open and I could see her few humble skirts, tops, and dresses.  There was a single lantern on the wall.

I turned around to her and she said bluntly, “If you tell anyone what you saw me doing I will deny it.  Who will they believe?  Me, or you who already have a bad reputation?”

I was stunned.  I didn’t know what to say.

“And if you tell, you can believe me that your life will be worthless.”

Then we both heard Carlos angrily calling out Irma’s name as he clomped down the corridor.

“Get into the closet!” she was pushing me.  “If you make a sound, you can believe me it will be your last.”  She closed the two doors of the wood closet.  I curled against a corner and tried to cover myself with a dress.

Carlos burst into the room and shoved the door shut again.

One of the wood closet doors popped ajar and I could see them both.

“What did you do?!” he started to rage.  He shoved Irma to sit her down on the bed.

She taunted him, “Be very careful what you say to me.”

Carlos gave her a swift clubbing across her face with his big hand.

Irma coiled and spit blood onto his pants, “I have hidden your precious suitcase.”

She leaned back and her eyes flashed, warning, “So, if you do that again you will never find it and they will kill you.”

“They will kill us both!” hissed Carlos.

Carlos fell to his knees in front of her, bowing, pressing his fists into his eyes and clenching his teeth, “Why did you do all this?  Why?”  He was almost crying.

Irma placed her hand gently on his head and caressed his hair as if he was a little boy.

Suddenly, Carlos arose and grabbed Irma’s hair on both sides of her head behind her ears, pulling her up from the bed.  They stared venomously into each others’ eyes.

Slowly Irma raised both her arms and with her finger tips began to stroke his wrists.

Holding her hair Carlos flung her against the bookcase.  The holy figurines on the shelves trembled.

Carlos then grabbed the neckline of her dress with both hands and tore it open to her navel.  Her breasts were tattooed in concentric circles.

He reached to the crotch of his coarse military pants and opened them.

He then lifted her dress and penetrated her, again and again pounding, pounding; bludgeoning her with his pelvis.

The religious relics tumbled to the floor.

She hung onto his shoulders with both her arms up his back.  Then her legs closed around him.  She leaned forward and bit his neck.  Through their clenched teeth they both screamed.  He staggered sideways and they fell onto the bed.

The tiny altar table jumped and the portrait of the Blessed Virgin fell forward onto the candles extinguishing them.

The room seemed to pulse as the lantern on the wall swayed to their harsh breathing.