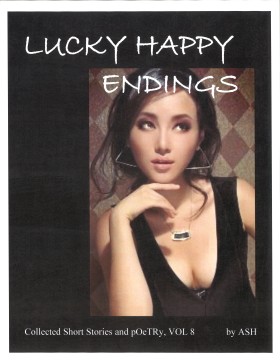 Gentle rain smeared lights into the pavement.  Jack Hackman, the short-story fiction writer, walked across the parking lot toward the Faber Publishing building.  Jack took a final breath of the fresh air that had descended from heaven and that had subdued the city.

In the lobby the music system played Central City Sketches from the jazz station.

“Hi, Barbarella,“ he said to Barbara the Receptionist.  She smiled like the Cheshire Cat.

Jack passed the elevator and walked up the stairs, thinking in cadence “prose, poetry, prose poetry; the two legs of literary ascension.”  At the third floor he entered the hallway that led to the West Conference Room.  He could smell that someone had already made coffee and that it was strong.

“Marie?” he smiled as he passed the little kitchen.  “You?  Early?”

Marie Lovall, the novelist, watched Jack swagger past wearing his open leather bomber jacket, V-shirt, and jeans and Marie muttered.  “Full costume tonight, I see,” just loudly enough so that Jack could hear her as he was entering the conference room

On the huge wooden table in the middle of the room was a big cardboard box.  Jack moved aside one of the plush blue-felt chairs and leaned over to peer into the box.

“Kittens?” he asked.  In the corner of the box huddled six tiny balls of fur, each one trying to get under the other in fear of Jack.  He couldn’t resist touching them but as he reached into the box two of the kittens turned to face him and raised their little paws in defiance.  “Giving me the toe, eh?”

As he touched one, the kitten spat and rolled backwards.

“They don’t have a mother and they need a bath.”

“They are yours, of course?”

“The janitor found them between some barrels of chemicals out in the storage shed.  He told Barbara and she gathered them up.”

“I don’t know,” said Marie as she picked up one of the kittens.  “They must have leaned against a leaky barrel.  I was helping Barbara cut some plastic-like stuff out of their fur.”

“Barbie should have been a vet.”

Marie smiled a little in appreciation.  “Yes.  She should also be a mother.  She’s already given the little guys their names.  This is Coquette.  That’s Baby, there’s Boots, Tiger, Frisky Piglet.  I think that one is Arnold, poor little guy.  His eyes are really bad.  And, good God, no wonder he looks so weak.  Look at those fleas!”

Jack picked up the box of kittens.

“Bath time,” he said as he carried the box into the little kitchen.  Marie followed.

Jack took off his jacket and began adjusting the faucets to give warm water.  “This is a deep sink.  I’ve done this before.  It is the only way to slow down the fleas or to even see them.”

“What are you going to do?”

“Don’t worry.  I’m going to hold them under the running water with one hand and pick fleas with the other.  The water stuns the fleas and the water mats the kitty’s fur so you can see them.”

Jack was unmoved.  “Look, just get a clean box and some towels.  They’ll hate it, but the water is warm, and if we don’t do it these damn fleas will suck all their blood.  How would you like that?”

Marie saw that she couldn’t prevent the rude baths.  “I hate fleas.  They have no purpose on earth.”

And thus, as the other writer’s were heading to the conference room they were one-by-one recruited to help dry the kittens.  Marie then placed the dry little fuzz-balls into a clean box and closed the lid flaps.  She pushed the box to a corner of the counter.

The writers were all back at the conference room table when Mr. Faber of Faber Publishing entered.

“I’m not sure that I am pleased to meet you”, smiled Mr. Faber wryly.

Jack didn’t let up and he said past Mr. Faber, to Marie, “All the women I know love your stuff!”

Marie smiled sweetly and nodded, “And all the dick-heads I know love your stuff.”