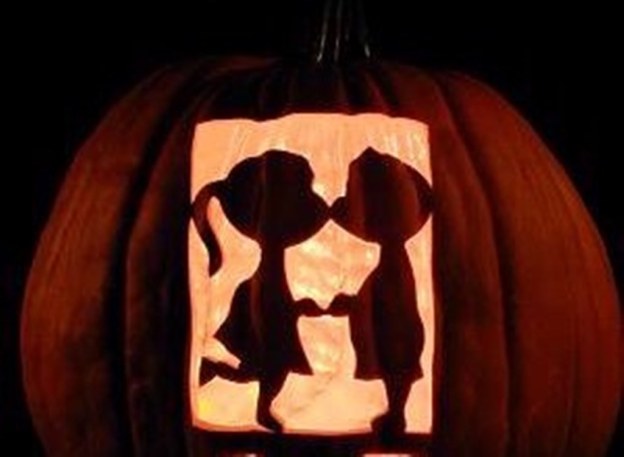 THE STOLEN KISSES OF PEPO PUMM

Grow up!  Grow the fuck up!  Grow up or just blow your brains out.  You are useless this way

But what can I do?  Drugs?  Alcohol?  What would be the point of anesthesia?

I’m going to feel this way forever, aren’t I?

Your kind of love is a heart cancer.

My heart is the size of a pumpkin!  A Jerk-O-Lantern.  A Jack-Off-O-Lantern!  With a hole carved out of it in the shape of us together.

“Oh, no, no!” pleaded little Pepo Pumm as his knees gave out and he fell upon his prized pumpkin, embracing it like a fallen comrade.

Little Katharina Primm asked in disbelief, “Who would do this!?  I’ve never seen one as big as that before.”

Pepo’s prized pumpkin was as big as both Katharina and Pepo put together but a hole had been stomped into the side of it.  Stringy pulp and the pumpkin seeds had been yanked out of the wound.

Katharine leaned forward and discerned a gooey footprint, saying, “Here is the mark of the shoe!”

Pepo swore tearfully, “I will find who did this!”

Pepo then laid his cheek against his prized pumpkin.

The pumpkin vine had sprouted unexpectedly in Pepo’s yard.  A bird must have dropped a seed.  Only one pumpkin gourd had formed on that vine.  And there had been something alluring about that little pumpkin as it grew.

Little Pepo had shown the pumpkin to little Katharina.  Pepo had said, “It is a magical pumpkin for sure.”

Katharina had said, “That is silly.  What kind of ‘magic’?”

Pepo had replied, “It isn’t silly!” and then for some reason he defiantly had said, “Love and money!”

Katharina had laughed, “What do you know about ‘love and money’?”

Pepo defensively had asked, “Well, what do you know about ‘love and money’, smarty pants?”

Katharina had replied coolly, “Girls know everything before boys do,” then Katrina had smiled slyly and said, “If that is really a magic pumpkin I will give you a kiss-a-day for every pumpkin seed inside.”

Pepo’s eyes had gone wide.  In a most peculiar trance he had said, “OK.”

Then Katharina had amended, saying, “Wait, silly boy.  Not so fast.  I’m not finished.  If this is not a magic pumpkin you will give me a penny for every pumpkin seed inside,” and she had folded her arms and tipped back her head and looked at Pepo with narrowed eyes.

Pepo then had wondered what might happen with so many kisses.  Then he had thought about his jar of pennies.  After all, he had kissed every penny for good luck before he had dropped it into the jar.

Pepo then had looked down at the alluring little pumpkin with affection and hope.

Katharina had looked at Pepo and how does anyone know what a girl had been thinking?

The pumpkin had eventually grown as big as Pepo and Katharina put together.  Both of them had been excited by anticipation.  Pepo knew why he was excited.  He had hoped that Katharina might be excited for the same reason.

But Katharina had asked Pepo “Isn’t it about time for the magic?”

Pepo had replied, “What about the magically big size of the pumpkin?”

That is when Pepo had discovered the cruelty that had been perpetrated upon his prized pumpkin.

Love lost is a dark matter.  One becomes a fleeing meteor, pulled this-way and that-way by other people and other things and their own centers of gravity, their own Loves.  And all the while the dark matter is the hidden force missing in one’s miscalculations, again and again and again.

That evening little Pepo Pumm sat cross-legged in his yard right beside the once-prized pumpkin.  He watched the stars bubbling up from the silhouettes of the trees.

Suddenly Pepo was startled to hear rapid panting behind him.  He turned and saw the silhouette of a small dog trotting toward him.  Before Pepo could arise the dog had come up to the wounded pumpkin and thrust its head into the gash.  Then the dog pawed and wiggled and squirmed completely into the inside of the once-prized pumpkin and Pepo then heard smacking sounds.  The dog stuck its face back into the frame of the gash and looked out at Pepo.  The dog was panting peacefully and blinking its eyes at Pepo in a friendly way.

Pepo could only ask, “Who are you?”

Before the dog could answer, Pepo heard Katharina say from behind him, “I thought I would find you here.”

Pepo said, “Look!  This dog just climbed into the pumpkin.”

Pepo said, “She just climbed into the pumpkin.  I think she ate some of the insides.”

Katharina laughed, “She thinks it’s her new house.  How cute.”

Pepo asked, “Katharina, do you think that this dog was the one who did that to my pumpkin?”

Katharina tilted her head and replied, “I’m not sure.  It’s possible.  Maybe.  I hear ‘bitches be crazy’.”

Pepo was suddenly inspired and he said with a hopeful hush, “Maybe she came from the pumpkin.  Maybe she’s the magic.”

Katharina rolled her eyes to the stars and said, “Oh, bow-wow-wow, Pepo.  You are a dreamer.  I am quite sure that this dog will go back to her real home when we don’t feed her.”

Pepo rebutted, “I have never seen her around before.  Why would she come into my yard?  What if she stays?”

Katharina teased Pepo, saying, “I’m not sure if you just crave my kisses or if you just don’t want to give me your pennies.”

Pepo dispirited said, “The dog probably ate all the pumpkin seeds.  How can we settle the bet now, anyhow?”

Katharina said, “New bet: If you don’t feed this dog, I will give you a kiss-a-day for every day she stays.  If she leaves, then you will give me your jar of lucky pennies, OK?”

Katharina was surprised when Pepo agreed.

And so Pepo named the little Pitt Bull “Pepita”, and Pepita stayed and was Pepo’s dog, and Pepo puckered for 265 kisses from Katharina.

Pepo gave Katharina a lucky penny for every kiss.

After 265 days, at every place the dog had crapped, a cluster of pumpkin vines sprouted.

Pepo puckered for the 266th time.

Katharina closed her eyes yet again and said, “Pepo, this is a terrible parable.”

I got a letter today.

There was no return address.

Inside was a penny.

But, the most ancient scrolls are kept on: THE TABLE OF MALCONTENTS

One thought on “THE STOLEN KISSES OF PEPO PUMM”